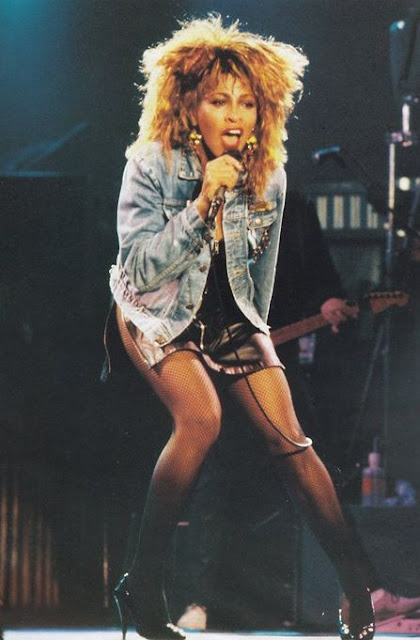 I was in the car the other day doing the school drop off thing when I heard Tina Turner's "What's Love Got To Do With It" and boy did it take me back. As my soon-to-be high school freshman got out of the car to get on her bus it clicked that I was exactly her age when this song was popular.

In fact, way back in 1984 Tina topped Billboard's charts and boy was she in great company. The rest of the top ten was rounded out by the likes of Prince, Huey Lewis & the News, John Waite and Corey Hart. Back in 1984 we used to do the math to figure out when our favorite videos would be on. Admit it, you did it too. New videos were at the top of every hour and they repeated every four hours. If you watched in the morning before school then you likely knew that they same exact videos would be on the next day, just 12 minutes later because the schedule barely changed at all.

Do you remember the summer of Tina strutting in those fishnets with her bitty jean jacket and pretty epic wig? Of course you do because it was the year of the Jackson's Victory tour which we all fantasized about going to see. My friends and I all took turns leaving for the Jersey Shore and mailing each other post cards from Wildwood, as if we'd not actually see each other again in a matter of days. Then there were those white clunky shell necklaces and bracelets. I think I wore three at a time because they were so cool and seemed to somehow prove that I had a life outside of Smalltown, USA. Ghostbusters was an absolute phenomenon and Beverly Hills Cop was a huge deal. Oh and my hair reeked of Salon Selectives. The smell is like a mash up of strawberry, cherry and god knows what else and if you're REALLY lucky you can find it to this day! 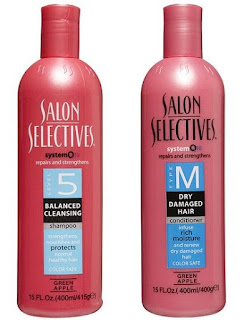 My dad was thrilled the year that Tina reinvented herself and came back. He had been a DJ for years and had an in-home studio that I would kill for now and he knew what a power house she actually was. While my local DJ's focused on how great she sounded after mentioning her great legs on the 45 of "What's Love Got to Do With It", dad always had a way of making me connect with the stripped down music, lyrics and the voice presenting it all to me. I'm also pretty sure that he appreciated Tina's fishnets too.

31 years ago, as Tina walked those legs right to the top of Billboard's Hot 100, where she stayed for three weeks, I was walking my little legs into 9th grade classes just like my daughter now. It makes me wonder, when she is my age and looks back on 9th grade, what will stand out in her mind?

Posted by DailyBOOM at 4:56 AM No comments:

The Last Song of the Night....

...is often disco or funk. Especially on a Friday.
Posted by DailyBOOM at 8:30 PM No comments:

1981 was a pretty big year for me. It was the year that I finally turned ten, or "double digits" which, for whatever reason made me think I was a total big shot. It was also the year that I got a sparkling new bike that looked exactly like this one, but it was in pink. 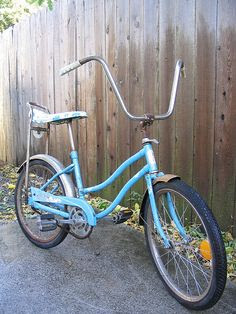 I spent so many hours zooming up and down the alley behind my house with a neighborhood filled with kids. It was always girls against the boys in whatever game we played and let me tell you, the girls were way out-numbered. We talked a good game until the boys started throwing rocks and then out came the water works and running home to tell our parents. Needless to say, the boys were always in trouble.

I also remember that some of the stupidest things ever classified as toys. Do you guys remember Ka Bangers???? The only point in banging them together was to do it without hurting yourself or anyone else. 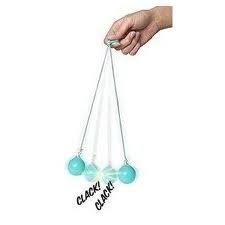 I can still hear my mother complaining about the idea of spending $3 on something so useless, yet my father did decide to take a 15 minute ride to find a set for me when every store near the house had sold out. The summer of 1981 was pretty memorable for me and not just because Lifesavers finally did the unimaginable and created blueberry lollipops, 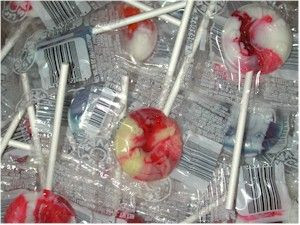 it was also a musical turning point for me. Up until then I had been a total disco queen. My dad would listen to albums every night and I'd always get to choose the last song. For the longest time I completely tortured him with Abba. 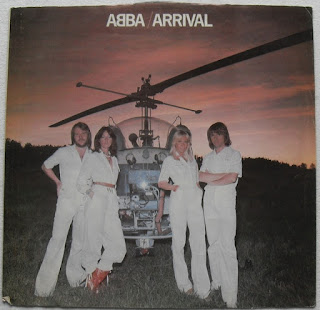 "The Winner Takes It All", "Dancing Queen", etc. I was pretty obsessed. Then something happened and that something was MTV. It premiered in August of 1981 and at first it wasn't available everywhere. 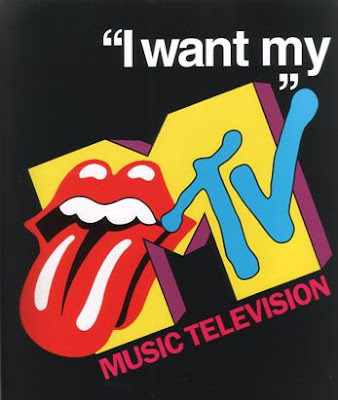 Not all cable companies back then were sure that they should take a risk on an all-music network. Chain record stores did have MTV and believe me they installed televisions just to have it playing in the store. I remember going to the mall with my dad and basically camping out in the Gallery of Sound, watching music videos. At first there was only a handful and Pat Benatar's "You Better Run", being the second video ever shown, seemed to play hourly.

This Pat chick, she was really cool and super tough. I loved the fact that she seemed to hold her own with the guys despite being so tiny. Maybe it was the striped shirt and the leather, or it could have been just the song itself but either way I was hooked. My dad, who was working at a rock station at the time was beyond thrilled to help steer me away from disco and towards the kind of music that he loved, rock. Crimes of Passion became my very first album and I think that I played it into the ground. 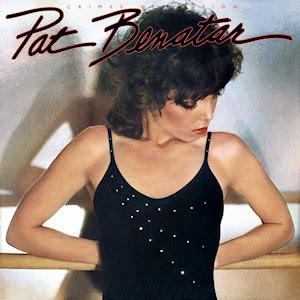 It's kind of ironic to me that it took me 36 years to finally see Pat play live. I'm not sure exactly why that is, but this year I spent my birthday at one of her shows and it was just amazing. While I loved her way back then I totally respect the example that she has set for other your women trying to find their own way in the music biz. Plus she seems pretty normal and has always put her family ahead of being onstage. In fact, she and her husband didn't start touring full throttle again until after their two daughters were grown. 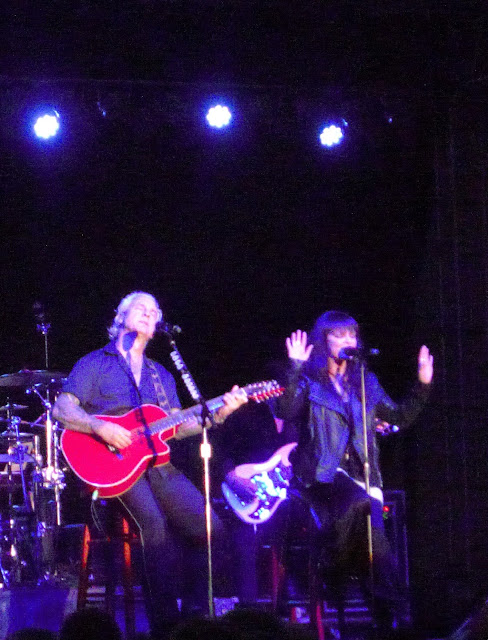 It's funny because if you see her in concert, Pat always mentions "You Better Run" as being a real turning point in her illustrious career because they really had no idea what, if anything would ever come of the whole music video concept. I have to think that she probably lit a real fire under more people that she could ever imagine just by taking a chance with a camera and that song!

Posted by DailyBOOM at 8:29 AM No comments:

You would think that working for a rock station would mean that all of the standard rock classics would be already in our system, but nope. There is a lot missing. "Stairway To Heaven" has been one of those MIA tunes, until this week. Last night as I was digging through our retro folder it magically appeared. Okay not so magically, our PD obviously added it but it absolutely made my night.
Posted by DailyBOOM at 5:36 AM No comments: 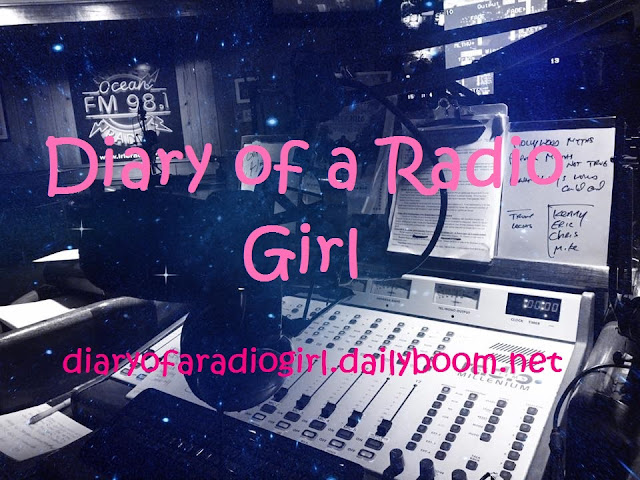 Well honestly, why not? I'm an entertainment writer by day which means that I read & write an awful lot. It also means that most of what I crank out is to help other sites to advance their brand, be it Fox, Music Times or wherever. Those topics are generally what's hot right now or whatever is breaking in the world of celeb news. Somewhere along the way, while stringing paychecks together I've missed just writing for the sake of doing it. Diary Of A Radio Girl is mine. Sure it goes hand in hand with my old school pop culture site, The Daily Boom, but this baby is mine.

Long before I realized that I was a writer I was sitting inside the studio of a radio station with my dad. Radio is his first true love and to this day nothing excites him quite like radio does. I can remember visiting his good friend at a different station during the evenings. The studio was dark except for the lights directly above the soundboard and being so young it reminded me of sitting in a spaceship or something else equally otherworldly. All that I really understood was that the music was coming from that spot and it sounded better than ever. Sure dad was talking to his friend in between airchecks but it was a cool experience that he was also sharing with me.

Music was everything in my house growing up. Dad had his own room devoted to albums, stereo equipment and eventually a card catalog system that allowed him to find absolutely any song in under twenty seconds (he had me time him). My friends all had People magazine on their coffee tables but if you came to my house you would instead find a copy of Billboard in its place.

Music has carried me through decades on this earth and every pivotal moment of my life inevitably has a song attached to it. I'm that person with a story to go with nearly every 80's song that happens to come on the radio while you're running to Walmart for a gallon  of milk and school supplies. I drive my kids absolutely crazy with my stories and "bad" musical choices but then I secretly catch them bopping along to whatever I'm actually playing.

A few months ago I was offered an opportunity to (FINALLY) host my own radio show and I dove on it. I've spent years working as a celeb reporter for various stations across the country, Canada & Mexico but honestly all I've really wanted was to be in-studio regularly. I feel like doing nights on live radio in that dark studio is like a homecoming of sorts. It's where I'm supposed to be it just took me a really long time to realize it and find my way.

I truly have stepped into a modern-day WKRP In Cincinnati  and this is at least part of that crazy journey.

Posted by DailyBOOM at 12:18 PM No comments: